A Whale of a Day!

A Whale of a Day! 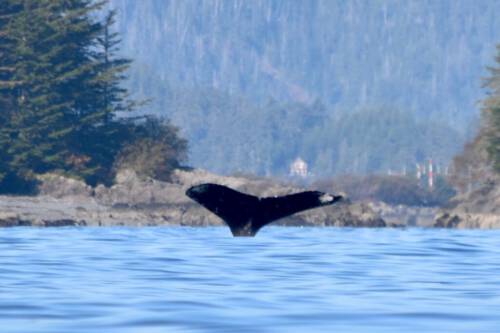 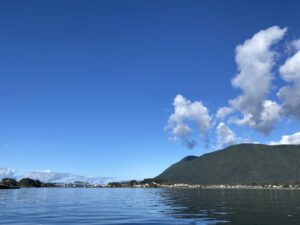 First off I just have to say: WOW!  What an amazing day we were gifted on Wednesday!!!  Ok sorry – had to just get that off my chest!  Before we move on – a little background on this whale saga for me:  Humpbacks regularly come through the USVI Feb/March and I have never been lucky enough to see any.  There have been countless times someone has a sighting of a whale and we speed out in the powerboat yet never see them. In all fairness, they aren’t thick as thieves down in the VI as they pass through but up here in Sitka they are much more regular to see.  However, in the 2 months we have been here we still have yet to see any blowspouts or whales despite all efforts to the contrary.

We had been planning a boat day for awhile because I wanted to visit Long Island, an island where the Hanson family has some land and Colin’s brother has a home.  I hadn’t been there yet so I wanted to go check it out after hearing so much about it.  The Friday before, my stepmom, Kelly, flew up 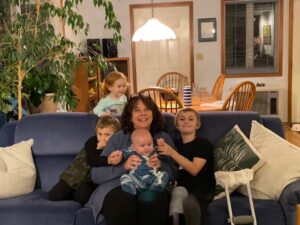 GRANDMA KELLY WITH ALL HER LIL ONES!

for a week long visit to see Sitka and meet Colin’s family so we decided to plan the boat trip for while she was here.  It’s been so amazing to be able to share all of this with Kelly; the landscapes, seascapes and most importantly – lots of really special family time.   Thatch’s young cousins instantly fell in love with their “Grandma Kelly” and it was as if Kelly had been here the whole time.  I love how the line between “my family” and “Colin’s family” has now completely blurred into one family with many branches.  We are so very grateful.  Anyway, there was only one day throughout her visit that was forecasted to be partly sunny – so we planned the boat day for that day.  Wednesday was already set to be a special day simply because of visiting the island and having Kelly with us but then Lee, Colin’s brother, dropped a little hope for whales.  He told us they had been spotted in the area lately, in a channel we would drive through.  I just couldn’t help but think – I never see them, I am sure we won’t and just be happy with the day without whales.  But in my heart I was hoping….

We arrived at Long Island, climbing over some quite jagged and rocky terrain to a trail leading up to Lee’s house which he built.  The fact that Lee brought in everything for that house and built it himself over the years is pretty amazing to me.  You just don’t see that as much these days, that kind of commitment and dedication.  I find it admirable.  I also find those qualities in Colin and I am thankful for their parents raising them into such great men.  We hiked around the island and it was simply beautiful!  It was like the island was a small enchanted forest marooned at sea, making it all even more whimsical than it is even normally here.

After checking out the island, we got back to the boat and it was time to head back to Sitka. 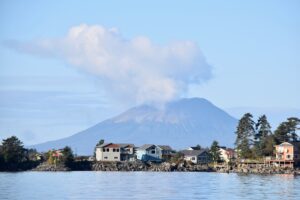 THE VOLCANO ON KRUZOF WITH CLOUDS LOOKING LIKE SMOKE!

With the delicate ocean swell and calm air the water was glassy smooth.  As we split a seam through the silky water I gazed at Kruzof, the island where a very old volcano lies dormant yet still ominous, its concave silhouette cast against the sky.  I look forward to visiting there, hopefully to beach comb and 4 wheel.  Colin has told me so many fun stories and I look forward to making my own memories there.  We sliced through the water, Sitka directly ahead.  Almost through the water I heard someone say something but it didn’t sound exclamatory so I didn’t react.  Then I heard Colin yell “Leah did you hear Lee?!?!” I turned my head, “No what?”  “Whales!” He yelled, “he saw whale spouts up there.”  I’ll admit it right here and now – I freaked out I was so excited.  “WHERE?????” I shouted, frantically and clumsily I grabbed my camera to look through the zoom lens.  I saw nothing.  Lee slowed down to idle and we all studied the ocean ahead.  Then Kelly yelled “Look, over there!”, she had spotted another one to our left. 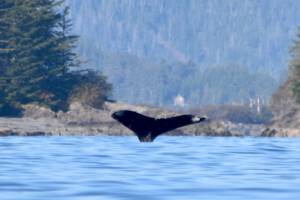 I looked and looked for the whale but when Kelly saw it again, I still hadn’t spotted it once.  Then Colin pointed back to the first spot “Over there!”  I kept looking back and forth, scared to miss when one.  “I don’t know where to look!” I exclaimed.  Then finally, I saw one!  At first I just saw his back and I clicked the camera madly, firing off shots hopeful they would turn out.  At this point I was just thrilled to see one’s back – but it got so much better.  After the whale’s arched back cut through the water, his tail began to follow.  Lee said loudly, “tail, tail, tail tail….” Warning us so we would have our cameras ready.  He flicked his tail into the air to propel himself down.  Wow!  We hung out for about 30 minutes, just watching and taking pictures of these graceful giants.  At one point we cut the engine, and as we drifted we could hear the whales blowing their spouts perfectly.  Then a few minutes later as we searched for the next time the whales would come up we also checked out some sea lions.  They all seemed perfectly lazy until a challenger for their position came and then it was GAME ON!   Experiencing all this, on such a beautiful day in Sitka – I honestly just don’t have the right words to describe it so instead here are my photos.  I hope they do speak a thousand words as intended.  Especially the one of Thatch! 🙂 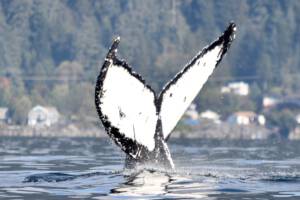 ONE OF MY FAVS 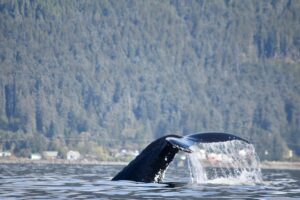 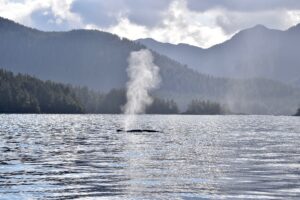 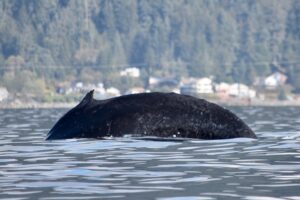 HUMPBACK ARCHING HIS BACK 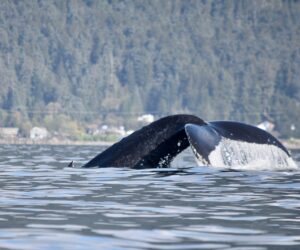 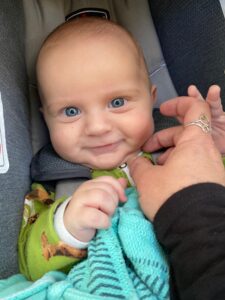 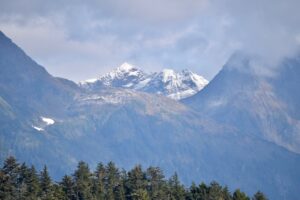 MOUNTAINTOPS GETTING DUSTED BY SNOW 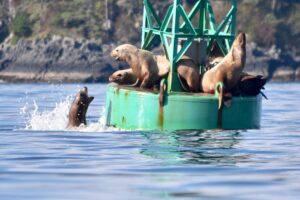 THIS SEA LION IS NOT GIVING UP HIS SPOT! 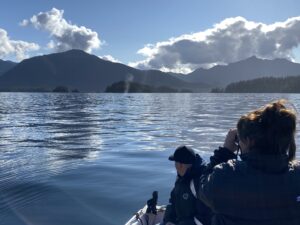 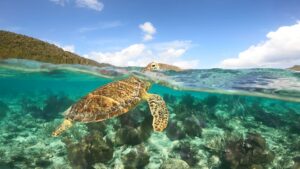 Coming Up: A new charter for those who LOVE the sea!